It’s 3am on a cold wintry morning and Donna Simpson can’t sleep.

Singer-songwriter Donna Simpson, from The Waifs, recorded the song on her mobile phone at 3amThe resulting video has attracted more than 200,000 views on social mediaMs Simpson says the song ‘is a bit of fun’ for other women experiencing menopause

It may only be a few degrees outside, but The Waifs’ singer-songwriter is feeling the heat.

So she reaches for her guitar and pens a song that confronts the source of her recent hot flushes: menopause.

The resulting video recorded on her mobile phone and posted to social media has had?more than 200,000 views.

”The amount of women who have written to me, who have started discussions, (from) that simple hilarious little video,” Ms Simpson, 51, said.

”You know, my sister Vicky said ‘Donna take it down, it’s too personal’. I thought ‘no, bugger it. I’m not’.

”It’s a joke, it’s funny, it kind of makes light of it …?the women have got back and spoken and said ‘yes we’re there, we’re there’.

”I didn’t mean it to, but it’s opened up this huge discussion.”

In one line she laments how her ‘soft young skin is now a blur’ replaced by ‘pimples and light fur.’

She then goes on to warn other women of what is in store: ‘Believe me your time will come, just like your sisters and your mum.’

Ms Simpson told ABC Great Southern that she went to the doctor after noticing her hair was thinning and she was getting hot flushes.

She had put it down to anxiety, but was surprised when her doctor said she was peri-menopausal.

”It was hard to take because growing up, old ladies got menopause,” Ms Simpson said.

”It was called the change of life … it was astounding to me that no-one would say the word and women would only talk about it under the table.”

But fans of The Waifs might be disappointed to hear that the song is unlikely to make it onto any of the band’s future set lists.

”It will never be played live. It was just a bit of fun and a joke and to say I’m just like all you other women out there,” Ms Simpson said.

”It sucks and (if) I can make some light of it, it would be great.” 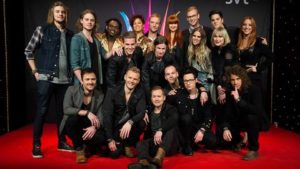